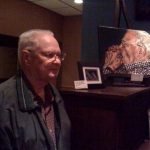 Through the years I’ve shared bits about my Grandpa Franklin.  He was a medic during WWII, a sports fanatic, a junior high counselor, a teacher, and a story teller. He’s been there for all of my 42 years. I never imagined the gift I’d be given of being able to honor him during his transition to the other side.

Here he is standing with the painting I did of him playing the harmonica back in 2009: 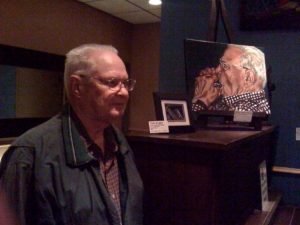 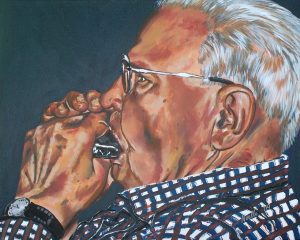 I was spending time with him and recording his stories during the past year. One particular story he shared really stands out to me. It’s about the time his medical unit cared for prisoners just released from the Bergen-Belsen concentration camp in Germany. One of the men was so thin and starving that they couldn’t even give him the shots he needed because there was nothing to put the needle into. He’d talk about how they’d feed him a spoonful of broth every hour and start to build him back up. His eyes were staring off as he told this story, I could feel him re-living it as he shared.  He talked of the wonderful civilians they were able to also help during the war, and about comforting the dying soldiers.

He often wondered if he’d done enough in this life. If he’d made enough of a difference. 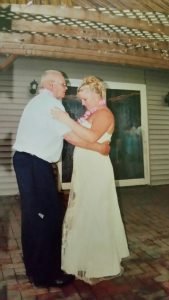 My Grandpa had a heart attack a little over a week ago. He was 94 and they knew he wouldn’t survive the surgery it would require to fix it. So instead they focused on keeping him comfortable, the unspoken knowing; he was dying.  We all shared with him our gratitude and thanked him for being in our lives. He told jokes to his Great Grandchildren who had come to visit. The next day those of us who could came back again and sat with him.  He slept a lot but also had times where he spoke long stretches of Finnish.

We watched as he slept on days three and four, sure that his time was near. I stayed overnight with him a couple of these nights. I explained to him that his body was tired. That he was in the hospital, that he’d had a heart attack. I told him that his body is having a hard time and the time is getting near for him to go to Heaven. I assured him it was okay to go, that we’d watch over each other and my Grandma. My cousins, aunts and uncles all had similar conversations with him.

My grandma and grandpa were approaching their 70th wedding anniversary this summer, my grandma talked to him about what a great life they’d had together.   One thing that I keep thinking about is how grateful I am that we hired a professional photographer to come and take photos during their 65th anniversary party 4 years ago. Pam Dusbabek at Heart of life photography captured so many beautiful images of my grandparents and them with family that I’m finding myself extra grateful for today.  Here is one of those photos: 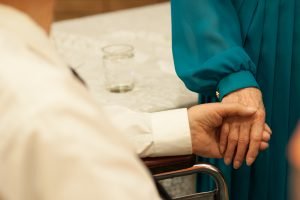 I re-learned the lesson that none of us know when the time is after the first week. While sitting and comforting the dying – the gifts and lessons are numerous, as is the sadness and reality of our fragility. Dying is not easy on the body, it’s very hard work. The doctors and nurses told us several times that his time to go was near. We said our goodbyes. We all gave him permission to go and encouraged him to see his parents and grandparents.

Yet, he continued to stay with us day after day. That we have no control in the situation. This makes sense mentally, but emotionally as each day passed and I said goodbye again and came home to do laundry, get some work, homeschooling and sleep in I surrendered more and more that I may not be the one to be there to hold his hand when his time came. This was between him and God.

A gift to say goodbye

I really cherished this gift of being able to talk to my Grandpa over those first few days after losing my own mom so unexpectedly and not getting to say goodbye. I looked around at his 6 kids that had gathered and knew their world would never be the same after this week. Yet it was a gift that they were able to say goodbye and hear from him that he loved them. As a society we tend to honor births with such excitement but there is a beautiful sacredness to being able to sit with someone facing death as well. Another type of transition. In my Grandpa’s case, there was the gratitude of a long lived life and a surrendering that it was his time and learning to be okay with that. This felt very different to me in comparison to losing my mom.

I made Aspen get up at 4:30am with me on Wednesday morning. We got ready and headed up to sit with my Grandpa once more. He was no longer awake or talking on this ninth day. That morning I kissed my Grandpa’s forehead and said hello, I sat on his right and later my Grandma joined me in holding his left hand. My dad was there also. We all sat together for a bit then we left the room for a bit to give my Grandparents a little alone time. We tried to be respectful that on some level my Grandpa may have preferred to have us not be in there with him while passing, so we honored that by giving bits of space to him.

Later that morning tears rolled down my face as we watched my Grandpa take his last breaths. I rubbed his chest and told him it’s okay.  We sat with him awhile after he passed and comforted my Grandma.  It was sacred, it was hard, but it was full of love and support. What a gift it would be to each of us if we could have our loved ones around us as we transition in our  nineties. Still, it never feels like there was enough time.

I asked him to say hello to my mom when he sees her, to give her a big hug.  We also asked him to send us a sign or visit us in our dreams. He looked at us like we were crazy but he agreed.

My Grandpa had a Christmas Eve birthday, mine is Christmas day. There was a special bond between us for that along with my sister who was born on New Years Eve. We may have had over 50 years between us but we shared many birthday parties together through the years. 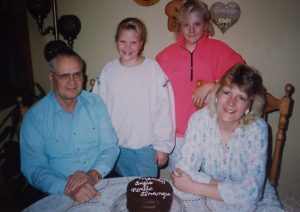 Putting the pieces together

I had to break my social media time off today to get on Facebook and find some photos for the funeral. I deactivated my account again right afterwards but it worth noting that value social media played today.

Thanks for letting me share a bit about this many who I knew better than most people. He gifted us with stories from the war, sports, stories from when him and my grandma were just starting out. Also lots of stories and photos of their travels. They visited so many places together during their life. Prayers for those of you comforting the dying right now or in the future. Hold space and witness their transition; may you be given the clarity of what an absolutely beautiful exchange between souls this experience is on so many levels.

Posted in coping with a death, Sacred Hellos, Social Media detox 2020 and tagged comforting the dying, death of a grandparent, Grandpa Frank, how to comfort family during death, how to comfort the dying, mourning, sitting witness to death, watching someone die, what to say to someone who is dying
← The surprising superpower that comes while grievingWhat I’ve learned after 10 weeks off social media →
Scroll To Top