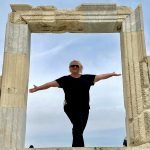 Stepping into our 2 weeks in Turkey I didn’t know what to expect. From the pictures I’d seen I knew it would like a mixture of Utah’s terrain and a step back in time.

The history that has taken place in Turkey is so deep, and there is so much you can see up close. In no particular order here was our experience of Turkey and our favorite sites.

I loved being able to explore up close, learn more about the history, (did you know Cleopatra, ancient philosophers, and biblical Saints are said to have walked these roads?) 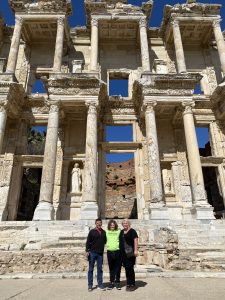 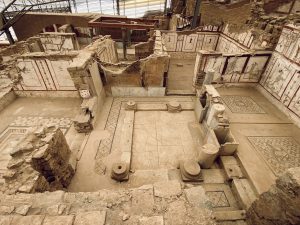 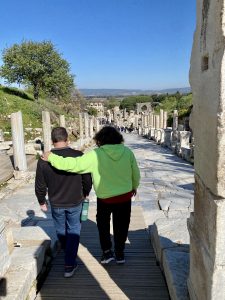 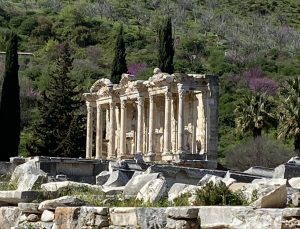 This area is in a valley between mountain peeks and large rolling hills. Up in the hills is a large travertine area, and a buildup of calcium deposits from the the hot sprints that have formed beautiful pools layered throughout the hillside. On the top of the hill is the ancient city of Heiropolis.   On the next hilltop over is Laodicea, another ancient city. One that was specifically mentioned by Jesus in the bible. From my understanding he was scolding their greed and obsession over money and hoarding it. 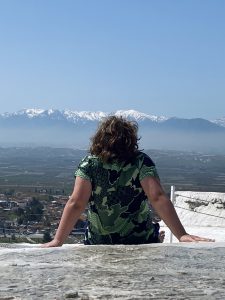 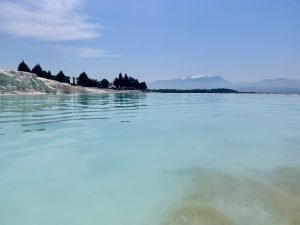 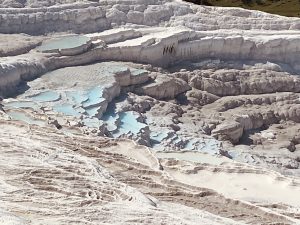 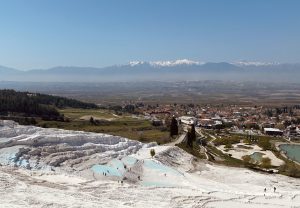 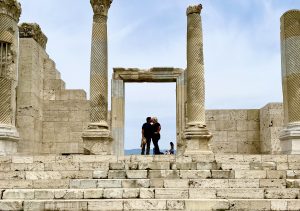 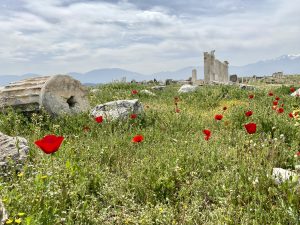 We rented a car from the airport and it was so nice to be able to drive on our own. We stopped at the Kaklik caves on our way to our hotel and then also were able to head to nearby towns and have lunch each day in little mom and pop restaurants. These turned into one of our favorite parts of our day. 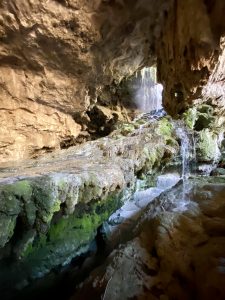 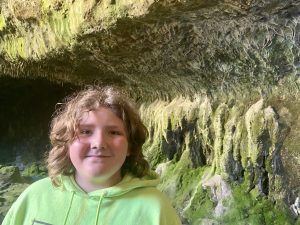 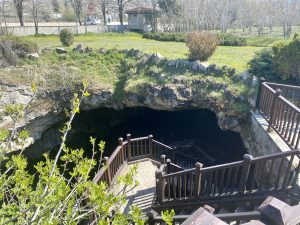 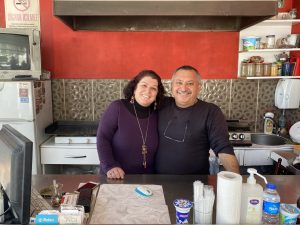 Toward the middle of the country is the Cappadocia region. This area features a giant volcano the erupted millions of years ago, covering much of the area in rich volcanic soil.  The variety of types of stones, then erosion have left hoodoos all over, called fairy houses, or castles. 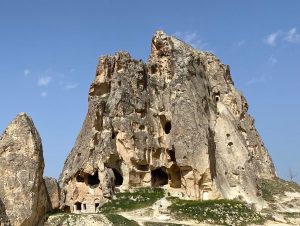 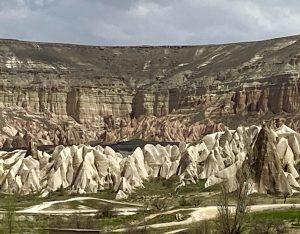 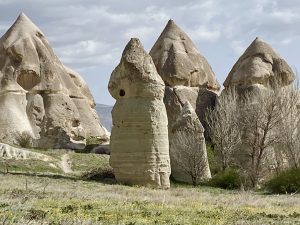 The area is stunning and continues to change depending on the lighting, time of day, and weather.

We stayed in a beautiful cave hotel within walking distance of Goreme. We rented a car while we were in this area and it was nice being able to have a bit more freedom to see other areas.  Highly recommend driving to Ihlara area. It’s full of steep bluffs and winding roads (with the best views) all the way down to the river where you can sit along the river and have a great authentic Turkish meal. 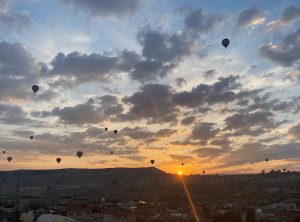 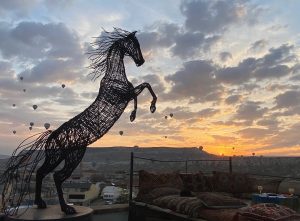 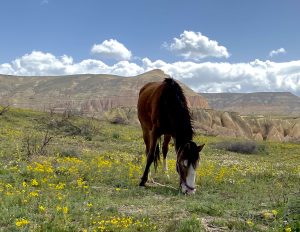 We wrapped up our time with time in Istanbul.  We rented an airbnb apartment near the Ghulane Park. The park turned into our sanctuary. We visited it multiple times a day. While we were there the tulips and other flowers were in full bloom. Nearby we walked to the Blue Mosque, the Hagia Sofia, and the Topkapi Palace.  Although I couldn’t tell you anything about the actual palace… our mistake. We had museum pass that allowed us to enter, we were so tired that day after walking all day long, so after getting in we decided we didn’t have it in us to properly take it all in. So we left.. the next day when we returned our passes were denied, apparently they are only good for a single entry per place. Our bad. We instead spent our morning at a terrific set of museums.

Mosques did require women to cover their heads. I used a duster I own and wore it as a scarf all day in between, then pulled it up and tied around my head when needed. It’s a respect act for their religious and cultural beliefs. I, as a visitor, am happy to oblige and step into their world a bit as an observer. 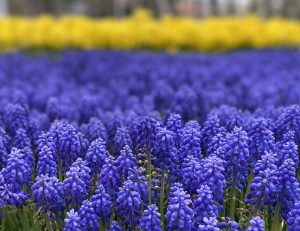 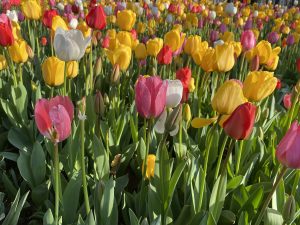 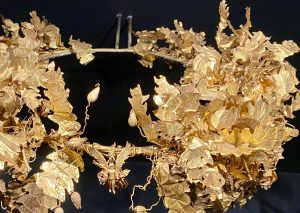 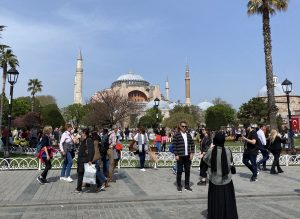 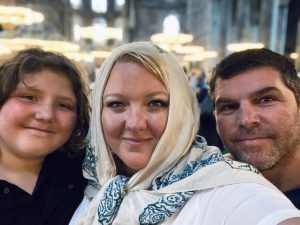 Our time in Turkey was great. It was spring so the weather was great, it was before their busy tourism season and that helped so much as well for us being able to explore on our own often.

While were there the exchange rate worked heavily in our favor. 1 USD was equal to 16 Turkish Lira.  (Typically in the past it would have only been equal to 6 or 7 Lira.   So our money was going twice as far.  We had a few hotel nights for under $25/night.  We’d often eat for the entire day for 3 of us for under $30, including eating out.

One of our favorite buys was this giant crate of fresh strawberries from a farm stand for $5 usd. 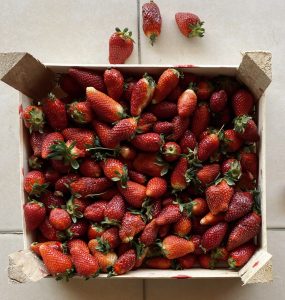 We made sure to tip well and tried to buy from local small businesses as much as possible too. Overall I’d go back to Turkey again in a heartbeat.  There are many coastal towns where I would love to rent a place for a month and work and homeschool from there all month with lots of fun in-between.

Posted in Dreams and Goals, Homeschooling, Soulful You, Travel and tagged cappadocia, cheaper than italy, historic, homeschool, is turkey safe, istanbul, pamukkale, see ruins, turkey
← The Treasures of Egypt – our travel experienceHow to get free hotel nights during Travel →