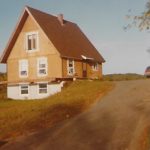 This past 4th of July afternoon Bruce was sitting out on the porch and I was just waking up from a nap when a car came up our driveway. Bruce was chatting with them for awhile as I woke up and eventually made my way out there to see what was going on.  In the car was a lovely woman named Kris and her mom, Nancy.  Nancy’s parents are the one’s who built our house back in 1977. Yes, the same year I was born.  And yes, my mom’s name was also Nancy.

They were so excited to see how we’ve taken care of and poured so much love into this home and property.  When Kris was a teenager she helped her grandparents as they built this house so they all had a special spot in their heart for this home.  For years they’d been wanting to drive up the driveway but finally had the courage that day when they saw Bruce sitting on the porch. 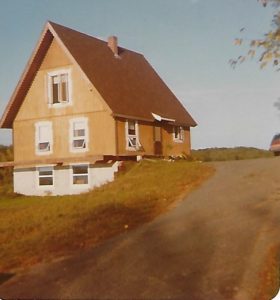 We continued to talk and we learned that 40 years ago the man who built our home (Nancy’s father) well… his name was also Bruce.   Seriously who is ever surprised anymore by all of these “coincidences right…”   I am in awe of how things come together..

So after just a few months after they built the house they discovered that they preferred living right in town and so they sold the house.  We’ve come to know Shane after he pulled in our driveway as we were moving in our home.  It was Shane’s in-laws who bought the house from Bruce in 1977.  After Shane’s wife grew up here, later Shane and his wife lived here.   Shane just a couple weeks ago sent us some pictures from when his in laws first moved in and their first years here.  I had tears in my eyes as I got to see this property bare of trees, and signs of the rows of trees they had planted that today help make this property so private and amazing. I’m so grateful for their insight and energy they poured into this land in ways that we still benefit from 40 years later. 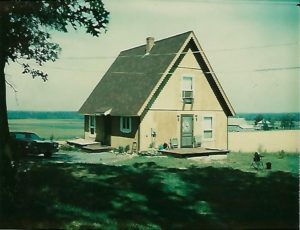 1978 – notice the lack of trees, you can see Minnesota in the distance. 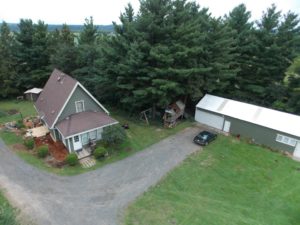 The trees along the driveway if you were standing at our house looking towards the road: 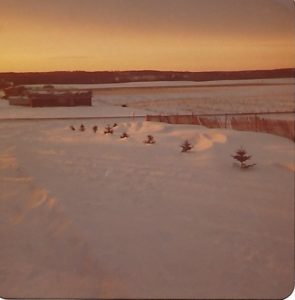 In the spring of 2015 we had spent years hoping to move, we’d even driven through Osceola in the summer of 2014 and loved it but couldn’t find a property for sale that fit what we were looking for and in our price range… I remember clear as day that Bruce and I had a conversation and decided to be practical, that we’d continue to save and spend the next year working on our house and plan on selling in 2016. We were okay with that plan.  But as I woke up the next day I just felt like was a test.  A chance to believe and go for the unseen and seemingly impossible instead of playing it safe.  At that moment I went and got boxes and I starting to pack up anyways and hold the intention for a miracle… a way to move that was possible even though we couldn’t see the whole plan…  then a friend saw that photo and helped make a connection for us to get this home we now love…. 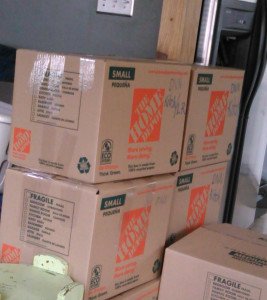 Then when Shane sent photos it was so fun seeing shots like this that weren’t planned, but made their way to help us really see it all full circle…

It’s fun to see the now bunkhouse as it was being built. 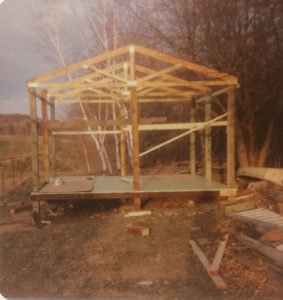 And then later when Shane’s wife was growing up: 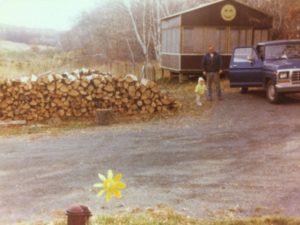 I can even find the humor and appreciate that when we bought the house this is what the bunkhouse looked like.  I’m so grateful that we could see beyond the crack house vibe and peacock poop to what it could be: 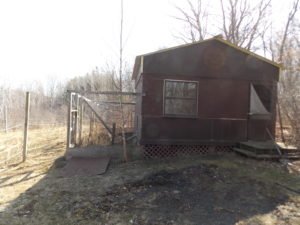 It’s still a work in progress… but it’s heading in the direction we want. This is where it’s at today: (it’s fun to see the forest filling in through each of the bunkhouse photos as well) 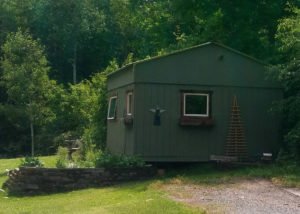 There has been so many moments where Bruce and I have felt like my mom and his dad (who have both passed) have helped us out from the other side… aligning things in a way we couldn’t have.   And as much as I love the house and the yard; truthfully it’s about more than that.  It’s not really about the stuff… it’s about finding a place that can be a creative outlet, that feels safe and inspiring, that allows us to express ourselves and gives us daily opportunities for gratitude and growth.   I also love that I know that 90%+ of people who see our photos of our place wouldn’t want to live here; it’s not what they’d want.  I love that we happen to not be over 5’7″ tall so we can easily walk down the short staircase to the basement without bumping our heads.. something that wouldn’t have been an immediate deal breaker for most people (that’s if they could get past the look of the bunkhouse).

So back to the 4th of July, as Kris continued to tell us about her Grandparents she kept mentioning how her Grandmother was a Christmas fanatic, finally after her saying this over and over I told her that was my birthday. She couldn’t believe it.   Then I asked her for her email address so I could keep in touch with her and learn more about the house, she wrote down her email for me and handed it to me….  of course it contained “JoyJoyJoy”… and yes Joy is my middle name.

I LOVE this life and how things unfold and reveal themselves and fill me with such awe.   Blessings to you!

Posted in Dreams and Goals, Little House on the Hill and tagged a frame, before and after, bunkhouse, history of our home, house, little house on the hill, manifesting
← New barnwood trays made from salvaged St. Croix Valley barnwoodwhen a mural is painted over… your gift erased →
Scroll To Top